HVIP: A Success in Incentive Design

The up-front cost of zero-emission commercial vehicles (ZECVs) is typically much higher than the cost of a diesel-powered vehicle. To make these vehicles more affordable and easier for fleets to purchase, California’s Hybrid and Zero-Emission Truck and Bus Voucher Incentive Project (HVIP) and Low NOx (nitrogen oxides) Engine Incentives provide point-of-purchase cost reductions through an innovative voucher system. Discounted vouchers for eligible vehicles make the vehicle purchases more affordable for fleets and promote greater commercialization of emerging technologies. Since 2010, the program has disbursed more than $300 million to place over 4,000 low-polluting medium- and heavy-duty vehicles on California’s roads.

Fleet operators cite high incremental costs as the prime barrier that prevents zero-emission vehicle purchases. Purchase incentives can help reduce the cost of ZEVs, as has been seen in the light-duty vehicle market, but these incentives have typically been provided as tax credits. In the medium- and heavy-duty commercial vehicle space, tax credits have not been as successful in promoting uptake of clean vehicles, because a tax credit has no immediate financial impact at the time of a purchase decision. Fleets must wait to be credited for their purchases and absorb the incremental cost in the short term. Additionally, some fleets are unable to benefit from tax credits, either because they lack sufficient tax liability or because the credit is monetized elsewhere in the company and does not “flow down” to the fleet manager’s budget.

In response to industry research by CALSTART and the feedback of fleets and manufacturers, HVIP was designed to reduce the incremental purchase cost of eligible hybrid and battery-electric medium- and heavy-duty vehicles. HVIP was developed and is funded by the California Air Resources Board (CARB) and is administered by CALSTART. The project started in February 2010, using state funds from license fees specifically dedicated to supporting advanced vehicle and fuel demonstration and deployment. Since 2012, HVIP has been funded by auction proceeds from California’s statewide greenhouse gas (GHG) cap-and-trade program as part of the California Climate Investments portfolio. HVIP was an immediate success that validated the VIP design; in its first year of operation, HVIP disbursed its funds faster than any program in CARB history and was recognized as the number one emerging state energy project by the American Council for an Energy Efficient Economy.

The Voucher Incentive Program (VIP) model is effective because it reduces the upfront cost of vehicles. The VIP framework is at its core technology-neutral, allowing policy-makers to identify which vehicles meet their GHG reduction or air quality goals. The program administrator then works with industry to enable purchases by working with original equipment manufacturers (OEMs) or vehicle modifiers to develop and register eligible vehicles and by establishing a network of vendors and dealers to partner with interested fleets.

When a sale is arranged, vendors request vouchers on behalf of the fleet purchasers. The fleet pays the vendor for the cost of the vehicle, reduced by the value of the voucher, which will be reimbursed to the vendor through a voucher redemption when the vehicle is delivered. Vendors are responsible for collecting information from all parties and managing the voucher application and redemption.

Because of market dynamics in 2010, HVIP was initially structured to help speed the early market introduction of clean, low-carbon hybrid trucks and buses by addressing the biggest barrier to their purchase – the high incremental cost of these vehicles in the early market years. At that time, production volumes were too low to realize price reductions through production volumes or design improvements. Recognizing that market growth for new technology takes time and requires predictability, CARB funded HVIP as a multi-year program to support initial fleet deployment of primarily hybrid trucks and support early clean truck and bus manufacturers. As additional technologies entered the early market, such as all-electric trucks and buses, HVIP has adapted, adding those products into the voucher structure.

HVIP differentiates substantially in terms of voucher value for each technology. Vouchers for hybrid vehicles are capped at 50 percent of the incremental cost of the hybrid system, up to limits based on GVWR that range from $8,000 to $30,000.  Base voucher amounts for battery-electric trucks are set to cover approximately the full incremental cost of the battery-electric truck, using GVWR-based incentive levels ranging from $20,00 to $150,000.  Class 8 hydrogen fuel cell vehicles receive $300,000 vouchers. These voucher amounts can increase depending upon where a vehicle operates and is domiciled, most notably including in disadvantaged communities (DACs) that suffer from a high air pollution burden and low relative levels of income. 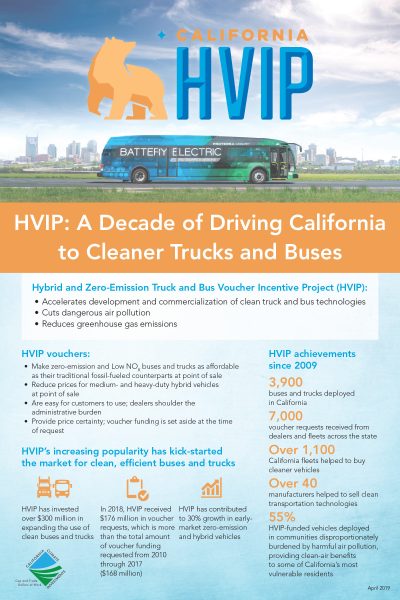 HVIP continues to grow and enable industry to meet new opportunities. ZECVs are a relatively new technology, but their growth in California has been rapid thanks to properly aligned and managed incentives to reduce GHG emissions from the transportation sector. More than 1,000 zero-emission trucks, buses and port vehicles have been deployed using HVIP funding.

The value of the VIP model has been recognized and expanded in other parts of the United States. Two new jurisdictions New York state and the City of Chicago, have each adapted the VIP model.